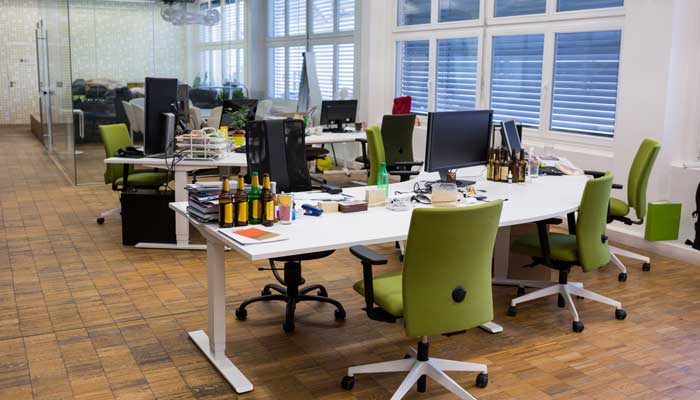 Office space has an impact on our productivity, happiness, and success. Feng Shui helps us create a positive environment in which we thrive. Do you want to know how to make your workplace more productive, happier and more successful? Then take a look at the 8 tips mentioned in this article!

The office should not be dark and unknown, lack of light

The dim light is not conducive to improving efficiency. Moreover, the dim light will bring a negative implication, can not bring more positive energy. Such a feng shui pattern, easy to recruit villains, will make a lot of difficulties in the work, but also low morale, is not conducive to unity. Therefore, the office light should be bright, but not harsh, to make the staff united as one, so that the business is more smooth and unhindered.

The seat should not be facing the door

As the door for the entire office airflow and energy entrance and exit, the seat is facing the door, will be the entrance of the gas field to, easy to affect a person’s subconscious, the nervous system, resulting in a hot temper or unexplained illness. You can set up a screen or plant at the door, as a way to resolve.

Office seats should not be empty

Office seat should have a backing; because the backing is good main nobleman, support force, act steadily, successor force; such as the seat after the vacant, it often forms a lack of strength, weakness, lack of personnel stability, lack of staff centripetal force, nobleman does not show, and even seriously affect the entire company’s foothold space.

Seat next to the sink or faucet can not have

There is water out of the place, it will affect the aura, because the water itself can gather gas, but also can disturb the magnetic field. Long-term sitting next to the faucet, there will be nervous system disorders or repeated luck, it is best to avoid.

No large garbage cans or miscellaneous items next to the seat

The same as the toilet, garbage cans or miscellaneous piles, is also a source of obscene gas, avoid it is good.

The seat should not be behind the copier or computer

Copy machine and computer spillover magnetic field is relatively strong, such as the seat is too close or in the rear of the computer, a long time easy to affect their own magnetic field, causing physical and mental disorders, indirectly will also affect the fortune. It is best to keep the distance, or put a pot of broad-leaved plants in the middle may not, but the plant should be replaced regularly, otherwise it will also become a second source of pollution.

The seat should not have insufficient light or no windows

If the light on the seat is too weak, it will cause a lack of solar energy, geomagnetic energy too much “Yin heavy” phenomenon, for a long time will make people lazy and negative, but also easier to be pessimistic.

Office Ming Hall should not be narrow and small limitations

Should be wide and vast; from the perspective of the Jing Palace Bagua, the office is in front of the Ming Hall, is a bit away, away from the gossip in the bagua is a symbol of the cause. Therefore, the hall, that is, the location of the front of the office, can be said to directly refer to the unit’s future good or bad. So if the office of the Ming Hall narrow and closed, is bound to symbolize the limited future of this unit, many obstacles, development difficulties. Later, if the office is open and secluded, it means that the company or the unit has a bright future, smooth and successful.

How Do I Feng Shui My Home For Wealth?

How Do I Feng Shui My New House?

What is Good Feng Shui For a House?

What is Feng Shui?

Dos and Don’ts in Feng Shui

No comments to show.